This week the Group’s specialist family and children law firm, McAlister Family Law, is covering the Brad Pitt and Angelina Jolie relationship difficulties currently making headlines around the world.  Jolie has made allegations of abuse against Pitt, so today solicitor Heather Lucy explains the issues around domestic abuse and divorce. 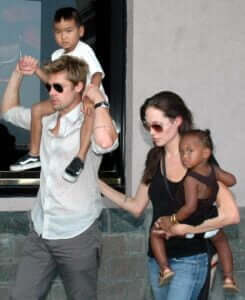 Domestic abuse is, sadly, a perennial issue in interpersonal relationships. When someone has found the opportunity, means, and assistance to leave a marriage that is characterised by domestic abuse, they often ask themselves the question “what impact will my ex partner’s behaviour have on our financial settlement?”

Legal Aid is not usually available for matters arising on the breakdown of a relationship, including the divorce proceedings and financial remedy proceedings, but, in a case where there has been domestic abuse, the victim may be eligible to receive public funding. It should be noted that this is a means-tested award and the applicant will need to show some evidence of their abuse at the hands of their ex-partner. A lawyer should be able to ascertain whether a client is likely to receive financial assistance and help them make the necessary applications.

Resolving the matter of the family finances on divorce is something that will likely weigh heavily on any separating couple’s minds. Separating spouses are encouraged by the courts to use means of Alternative Dispute Resolution (ADR) before resorting to an application to the court but this is not appropriate in all circumstances. One such circumstance is where there has been domestic abuse; the courts do not consider it appropriate to make attempting ADR a pre-requisite of any application for financial remedy in this case.

If a separating couple cannot decide on how their assets should be divided, they will most likely ask the court to make a decision for them. When the court looks at how the parties’ assets should be split, they will need to consider a list of factors including the parties’ relative ages and earning capacities, the length of the marriage, and whether there are children of the family. One of the other factors the court can consider is the conduct of each party.

Conduct is very rarely considered to be sufficient to change the outcome of a case. This is, in part, because the court does not seek to apportion blame for the breakdown of a relationship. The court, in reality, only takes into account conduct that it would be ‘inequitable to disregard’. So, what exactly does that mean? In short, it is unlikely to include domestic abuse.

Family lawyers will refer to this as the ‘gasp factor’ which shows that the behaviour of the perpetrating party must be enough to warrant shock – however, bear in mind this is not a precise legal test.

When coming to a final award, the court must have regard to meeting the parties’ needs. Interestingly, the court can choose to penalise a party for their conduct to an extent that their needs are not met but this is a rare situation indeed.

Domestic abuse, unless it is of the most extreme nature, is unlikely to impact a court’s decision on how the matrimonial assets should be divided. Parties should be made aware of this at the outset of their case as not to increase litigation costs or protract the proceedings bringing an end to a particularly unhappy marriage.

At McAlister Family Law we can give guidance on what the courts may take into account, but the behaviour is generally thought to be extreme to the point that the courts feel that it would be inequitable to ignore the behaviour.  Unfortunately, the vast majority of cases that have an element of abusive or controlling behaviour do not impact on the financial settlement that the court would order or approve.

If you are affected by any of the issues raised here, please get in touch today.  We are here to help you.